The Euronext Milling Wheat future is a commonly used indication for wheat prices in Europe and Africa. The tick size for Matif wheat (Euronext milling wheat) is € 0.25 per ton (total contract: € 12.50). The delivery months are March, May, September and December. There are always traded 12 contracts. The last trading day is the 10th day in each delivery month, at 18:30 clock. (If not a trading day, the subsequent trading day applies) The standard quality specifications are as follows:

MATIF (Marché à Terme International de France) is a former futures exchange in France. It was merged with the merger of the Paris Bourse with Euronext NV to Euronext Paris, which belongs to the exchange operator Euro Next. Altough the contract is not named "Matif Milling Wheat" anymore, it is still commonly referred by this name. The official name for this contract is Euronext milliing wheat No 2.

Due to the historic development, Contract No 2 legally did not include all hard quality specifications needed. Instead, the quality specifications could be altered by the receiving warehouses. Nevertheless, the market participants were not aware of this "loopwhole" in the contract. When the warehouses announced that they would accept lesser quality standard for the harvest 2014, the futures contracts for milling wheat prices dropped immediately. Until then, it was never questioned that Euronext milling wheat future was the most important hedging instrument for the European grains trading community. An US American Futures Exchange, the CBOT, saw this as a good opportunity to get into the European grains market and quickly announced a CBOT European Wheat future. This European CBOT Future was initally aimed to be launched in 2014 to offer a reliable future as hedging instrument and investement instrument as it included hard quality specifications.

CBOT announced in June 2016 that they will launch the CBOT European Wheat Future in Fall 2016. The contract will be crosslisted with the established CBOT contracts in Chicago to bring additional liquidity to the market. As a major advantage, CBOT claims that their delivery system is more advanced than the Matif/Euronext Wheat delivery system. Prices for the European CBOT contract will be on the ZMP platform on the first trading day. 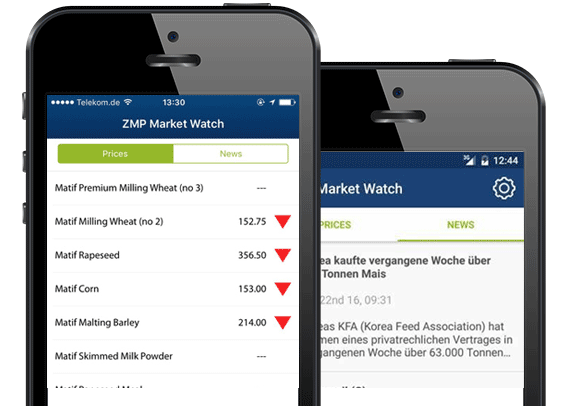 Download "ZMP Market Watch" from the App Store or the Playstore

ZMP Terminal: All the information you need at a glance 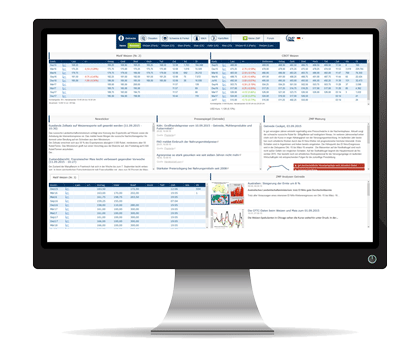 The Terminal view is ideal for display on a second screen - or you can keep it running in the background and access it at your convenience.

The Terminal allows you to view different news sources and future exchanges at a glance without having to click.

We have the fastest and most up-to-date service in Germany:

Anything that has to do with grains or oil seeds will show up in our news feed with no more than 10 minutes delay.